The Rally Cap Program is an initiative to enhance players and coaches first experience with the game. The program

helps teach players and coaches the five FUNdamentals of baseball in a fun and safe environment. Players have the opportunity to perform different tasks in order to earn a colored Baseball Canada Rally Cap. Cap colors correspond with various levels of achievement. The program is designed for young baseball players (ages 5-7) teaching the grassroots of baseball to individual players to increase interest in the sport. For more information on the Baseball Canada Rally Cap Program click here

Ages: must be turning 5, 6 or 7 years of age during the current season

Goals of the program

The most important individual in the Rally Cap program is the coach. The coach is the person the players look at for instruction, encouragement and inspiration. The assistant coaches, as well as the parents, take their cues from the coach. Therefore, success of the program is dependant on the coaches embracing our goals and working to achieve them.

In April, players who have registered for the Rally Cap Baseball program, will be required to attend the evaluation sessions. The evaluations are conducted under the direction of the CMBA Board and independent evaluators. Evaluations will be based in accordance to the Baseball Canada Rally Cap evaluation file ranking system. Evaluations will be in the three main fields of abilities in throwing, receiving and hitting. This will enable the player to be placed at the skill level that is appropriate for them. 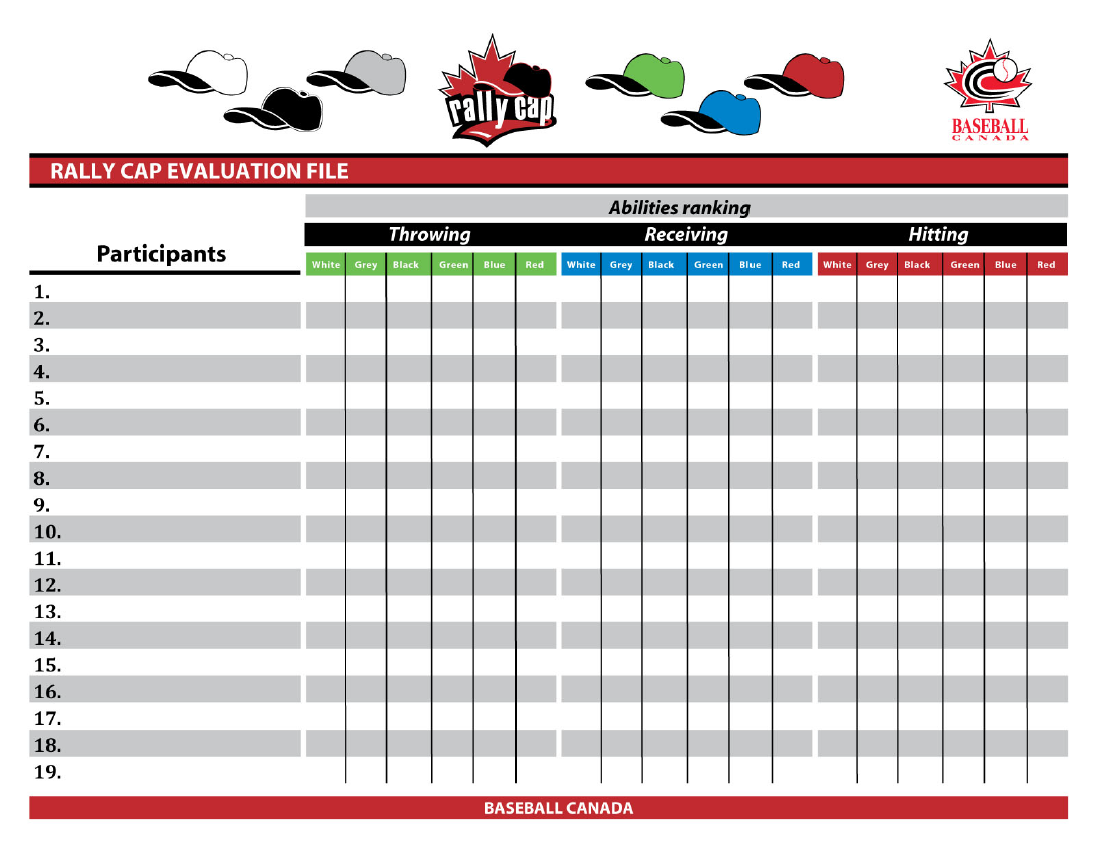 Once the evaluation process is over, team rosters will be placed on CMBA's website.

The Six Levels of Abilities in the Evaluation Process ranging from lowest to highest consists of the following:

Once evaluations are completed, teams will be selected, and players will be given the appropriate Rally Cap Hat based on the evaluation of their abilities. They will also be assigned team Jerseys.

Outside of the required standard baseball equipment (bat, glove, helmet & personal protection), It is also recommended that players show up in athletic wear (track pants/sweatpants/shorts) for their games/practices taking into consideration the weather.

Structure of the Rally Cap Program

On the final day or throughout the season, each coach will perform a skills test of the abilities of his/her players. This will be documented on a final Report Card which will show the progression of the player. These report cards may be used to help determine the next stage that the player will be at for the following season. These report cards will be passed out to the players at the end of the season.

Coaches will be chosen based on the applications submitted to CMBA and the Coach Selection Policy. We strongly encourage parents to take an interest in coaching as it is an integral part of our ability to field teams. If we do not receive an adequate number of coaching candidates, CMBA will rely on parents to fill these positions in order to field teams.

A Rally Cap coaching course thats approximately 90 minutes in length will be provided at the beginning of each ball season.

As players, coaches and parents, you will be responsible for reviewing, signing and ensuring you are familiar with:

The CMBA Rally Cap Directors will be responsible for setting up and overseeing the Rally Cap Program throughout the season. Responsibilities include, but are not limited too, helping in the coach selection process, providing team direction, conducting and assisting through the evaluation process, addressing disciplinary issues, parent concerns and general complaints. The Directors are dedicated to ensuring the guiding principles and the general philosophy of the CMBA Rally Cap program is followed by all players, parents and coaches.

Manage your identity from the palm of your hand to the top of your desk.